Let me get to the meat and potatoes about this travelling thing – what the hell do you eat when you’re in countries like Egypt, South Africa, and Tanzania? Well, let me tell you that Cathryn and I have probably walked a hundred miles in the last two weeks and we’ve still managed to put on a few pounds.

Yes, you can find McDonalds and KFC in cities like Cairo and Capetown, but where’s the adventure in that? We learned a valuable food lesson a few summers ago in Venice when we booked our first food tour with Venice Bites. Cathryn and I are both foodies and we have no problem trying new things or local fare, but where do you start in a strange new city.

We’ve learned that booking a food tour not only allowed us to try local delicacies, but we got to find the best spots to find good eats. We all know what it’s like to wander from restaurant to restaurant browsing menus until you’re hungry enough to take a chance on whatever sounds good. Having a local guide pointing you in the right direction is invaluable, especially if there is a language barrier.

Egyptian food was a complete mystery to us, searching for dishes online was like trying to count the grains of salt a shaker. We had booked our tour with a company called Ramasside , and when I discovered we had time to kill before booking into our hotel we decided to add on a food tour with their company. It was a wise choice.

We were tired and jet-lagged and the last thing we would have wanted to do was look for a restaurant and/or decipher an Egyptian menu. The company rep who picked us up at the airport delivered us directly to a local restaurant where we met our food guide, who was also our man in Cairo for the next three days. After finding out what we liked and disliked he had us eating breakfast with the locals…falafel, some kind of bean pita thing, veggies and bread. They don’t eat meat in the morning, but our guy fixed me up for lunch. It was all good!

In old Cairo, where we ate lunch, we enjoyed a smorgasbord of stuff that I’m not about to try and name. For comparison, we found much of the food similar to the Lebanese or Arabic fare back home. The next day our guide had the driver take us to the best place in town for hawashi – minced meat stuffed pitas that are coated in butter and baked. I’d have to compare it to my grandmother’s meat pies, but with an Egyptian twist. The only problem we found in Egyptian restaurants was the lack of booze. Muslim equals no pork or alcohol. 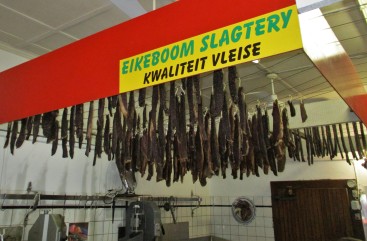 Venturing out for food in Capetown was another complete adventure for us. We’d noticed a pub called the Fireman’s Arms right next door, but the landlord said it was ‘just a neighborhood pub’ and that we should look elsewhere. Boy was she wrong. Acting out of hunger we tried the pub next door and were happy as clams in sand. They had a good selection of craft beers and the food blew us away. Cathryn had a lamb shank and me the smoked pork chops – both the best we’ve ever had, and about 60% of what we’d pay at home.

In Stellenbosch, the center of wine country, about an hour north of Capetown, we signed up for another food tour. We’d been eating very well, but wanted to make sure we tried some local dishes just to say we did. Once again, it was money well spent. Bites and Sites took us on a 4 hour walking tour through the historic town. Not only did we sample local teas, wines, foods and deserts, we learned a lot about the town’s history and got to see some of it’s oldest and most famous sites.

We sampled and learned about different teas, tasted good quality South African wines, ate specialty baked goods, and ate things like biltong and home made sausage. For lunch we had a tray of assorted local dishes like bobotie, chicken pie, and snoek fishcake, paired with more wine. The tour was very informative and a good bang for our buck. Once again, having a guide to steer us in and out of the right places was invaluable.

So if you want to eat exactly the way you do at home, than you should stay at home. For Cathryn and I, eating and drinking and mingling with the locals or other like-minded tourists is what travelling is all about.  Cheers and bon appetite!