For this year’s annual bike trip the S.O.B.’s did a run up to Parliament Hill in Ottawa, and then back. Our total damage was just over 1100 miles in four days.

We had an extra biker this year, Karl, who joined Tim, Devin, Chris, and myself (Papa Bear). The destination is different every year, this trip was planned by Chris and Tim. Our departure on Thursday morning was delayed by the late arrival of the boys from Michigan, but they made a pickup at the duty free shop in the way of an apology.

It was almost lunch time when we met Karl for breakfast at the Country Diner on Manning near County Road 42. With our bellies full, and a big blue sky looking down on us, we slipped into the middle lane on the 401. Our first stop was at Earl’s, in London, where the beer was cold and waitresses hot.

The ride along the 401, 407, and 400 were boring, but light traffic and perfect weather helped the world become a better place. Chris had his heart set on dinner at Weber’s, near Wonderland, but the rest of us would have preferred a sit-down restaurant with the option of another beer.

Our first night found us in Huntsville. We caught some rays and quaffed cocktails outside our rooms, then did dinner and more drinks downtown on the waterfront. Karl thought it was a good idea to bring a couple of pizza slices back to the hotel. The neighborhood raccoon totally agreed with him.

Friday’s ride had been on Chris’ bucket list for a long time. We rode east, into the sun and through Algonquin Park, for most of the day. The only obstacle we came across was a sandwich board sign at a trading post on the highway. Karl, who is a motorcycle driving instructor, clipped the sign and dumped his bike. No damage, no injuries, no foul. 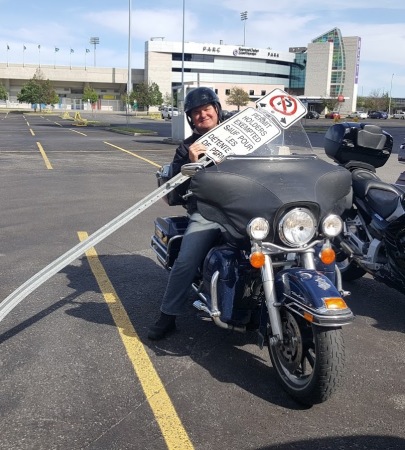 Canada’s capitol was our playground and bedroom for the evening. We didn’t waste much time in the hotel, there were too many downtown bars and restaurants to explore. None of us could decide what to eat for dinner, so we had a bit of everything. Oysters and mussels at one place, then sushi at another. More drinks and appies at two rooftop patios, then dinner at the Keg. 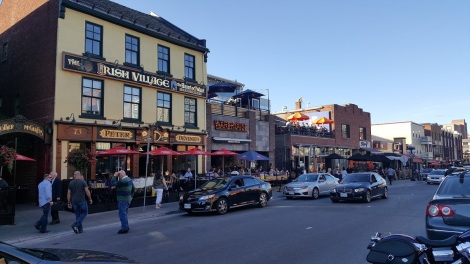 The food at the Keg was better than the entertainment. Chris came out of his shell. There were no crayons to play with, so he played with the glassware and utensils on the table. His wine glass and the wood table sustained minor injuries.

Pointing out the fact that nobody had really seen Ottawa, Karl took us on a driving tour in the morning to see the Parliament buildings. A light rain forced us into our rain gear, but it let up when we got on the road. A huge sinkhole and road detours downtown, prevented us from popping in on Justin for a photo op. The rain found us again, further down the road.

Big and busy highways, most of the day Saturday, weren’t enough to keep us away from Cowtown. If it wasn’t for cell phones and GPS, Chris would have spent the night in Toronto by himself. We lost him on the Don Valley x-way, when Tim crossed four lanes of heavy traffic to make the exit. I found an opening to follow him and the others, but Chris missed the opportunity.

There’s always lots of choices of food and drink in downtown Toronto. Our hotel was near King Street, so we didn’t have to wander far. We had dinner at Kit Kat, it was top notch. It was another late night, and Karl won the hangover contest Sunday morning. He decided on an early start with Devin and Tim, who like to boogie down the highway and make it home for dinner.

Chris and I rolled around (separately) in bed a while longer, then left T.O. along Lakeshore Boulevard. We were greeted by waterfront waves, sunny skies, and spandex sportswear. After a nice breakfast in Port Credit, we jumped on the 400’s, till the Aylmer cut-off, where we lolly-gagged on more leisurely back roads, the rest of the way home. We even managed one more patio and beer stop in St. Thomas.