Once again, while travelling Route 66 from Chicago to L.A., Cathryn and I have had our faith in humanity renewed. There really are friendly people left in the world, all you have to do is say hello and talk to them.

Who’d have thunk there’d be anyone willing to talk to you in a metropolis like Chicago – it’s one of those places you’re programmed to think that you can’t make eye contact with anyone for fear of them saying, “What are you looking at?” So much for preconceived ideas. Our first glaring example was at the Congress Plaza Hotel in the windy city.

We were wandering around the turn-of-the-century hotel and saw photos of the grand ballroom but had no idea where it was. The front desk and concierge were busy so I looked to a stern-faced security guard, who looked more like a state trooper, with his back glued to the wall so he could take in the room.

“Do you want to see it?” Pete asked, when we inquired. He snapped to and headed off down the main hallway with us in tow. Pete walked us into a dark banquet hall and went to a breaker panel to turn the lights on so we could see the ornate ballroom that boasted the first air conditioning in the country and noted guests like Al Capone. Turns out Pete was a good story teller too, having actually been shot in the face when he was a Chicago cop.

Taking a cab in any big city has become a concern, but not when our driver from Ghana chatted us up, telling us how he visits home every year and that he’d been a hack for twenty years. Too bad Uber is making guys like him a rarity, his knowledge of the city was a boon for us. 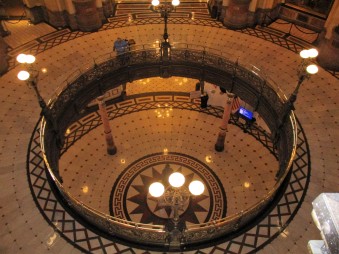 Even in the Capitol building in Springfield Illinois we found cordial staff – from the security guards manning the metal detectors to the custodians polishing the brass. Without being asked, they took pause and offered us directions and made suggestions on how to tour and enjoy the building. We’ve never encountered this behavior in any gov’t buildings at home.

On Route 66 near Carthage Missouri, we met a character named George who tended to an old gas bar loaded with antique vehicles and memorabilia. Busy with his chores, he took time out to give us a tour and write down names of people and places to see and visit in town. His suggestion took us to Boots Court where Clark Gable spent his honeymoon. Debbie, the proprietor there apologized for being booked and called a place down the highway for us.

We stayed at the Best Budget Inn, a pleasantly surprising roadside motel beside a scenic lake. They had a patio with barbecue facilities out back that allowed us to cook up a couple steaks for dinner. The owner, Paula, came out to visit and light the tiki-torches around the pool. She sat and chatted with us as if we were long-lost friends.

Acting on another of George’s recommendations we visited a tiny re-built town called Red Oak II. The land owner was dismayed at how his home town had closed down and the buildings were abandoned so he bought them all and relocated them to his own land. We strolled the lane way and admired the turn-of-the-century buildings that would have weathered away into oblivion had they not been rescued. 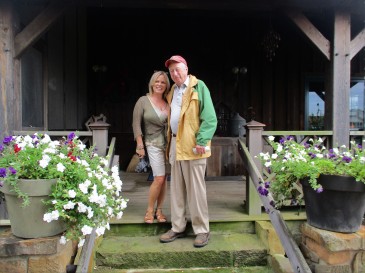 While admiring a rustic but newer home, a voice called out from the veranda. Jim invited us onto his porch to set for a while, as if we were neighbors. We chatted about the town and owner, who was a friend of his and local artist responsible for all of the metal art in the area. Jim was the former mayor of Carthage and a retired travelling salesman who covered eight states.

After dinner in Kingman Arizona we strolled the old downtown where many shops played on the Route 66 theme. We stopped at a storefront where a woman had just removed the paper from the windows of a new shop that she was about to open. When we asked about it she gave us a condensed history of the city and other businesses in the area. She went further, inviting us to her grand opening if we were still in town.

And even in Las Vegas, where you are normally just money in a slot machine, we were greeted at the front desk of the Silver Sevens Casino by Bianca. She seamlessly checked us in early at eleven a.m. and comped the refrigerator I’d requested for our room for our two day stay. She asked where we’d like our room to be and located us within fifty feet of our car. Later, she helped me with an email and fax I needed to send back home.

These are just a few glaring examples of some of the polite and kind folks we’ve met on this trip. It doesn’t seem to matter what city or state they live in, or what age or color or religion we may or may not have had in common with them. They really are out there, just say hello and talk to them.