Where in Windsor can you find a restaurant with excellent food and service that’s been around for 40 years? The answer is the new old Cook’s Shop Restaurant. Spencer Dawson, took the reigns when the former owner retired from the business he started in 1980. The cozy dining room and Italian menu remain mostly the same, with a few minor changes to both. The old meat display case is gone but the natural stone walls and romantic setting remains the same.

The new owner introduced himself to Cathryn and I, taking the time to explain how he strived to keep fan-favorites on the menu, and brought in a few new recipes handed down by his grandmother. Her homemade bread was the first thing to knock our socks off – a sliced loaf that was crispy golden on the outside and a cornbread texture on the inside, served with a soft herb butter. The wine list covers all bases and quite reasonably priced.

We talked about Dawson’s idol, Lino, the previous owner, who just happened to grace us with his presence moments later. We were lucky enough to chat with both men and capture a few photos of the two most passionate restaurant owners I’ve ever met. Our Caesar salads were delivered on their departure from our table, the original recipe that Dawson said he had to retain in order to prevent a riot.

I forgot about the Escargot – large and tender snails served on a bed of mushrooms sautéed in garlic butter and served in phyllo pastry. We had time for another slice of bread before the salad. Our waiter, Moe, was Johnny-on-the-spot and never far from our table. I ordered the Spaghetti Carbonara, with double smoked bacon, and asked to have it on the creamy side. Yep, more sauce to soak up with the bread. It was one of the best pasta dishes I’ve ever had.

Cathryn ordered the Rack of Lamb, four thick portions stacked over a pea and mushroom risotto. Sitting on my hands was all I could do to resist snatching some while she was away from the table. It was juicy, tender, and cooked to perfection. Sadly, we couldn’t finish the last two pieces of bread. Our meals were quite generous in size.

Although we were both stuffed, I needed a pieced of cheesecake. They had two and I went for the salted caramel. Not too rich, it had the perfect combination of sweet and saltiness. We both loved every part of our meal and enjoyed the experience of meeting both the old and new regime. Giving the Cook’s Shop a 10 out of 10 was a no-brainer.

Watch for Dawson’s future plans, while he renovates the whole building, possibly adding another restaurant and living quarters above that. 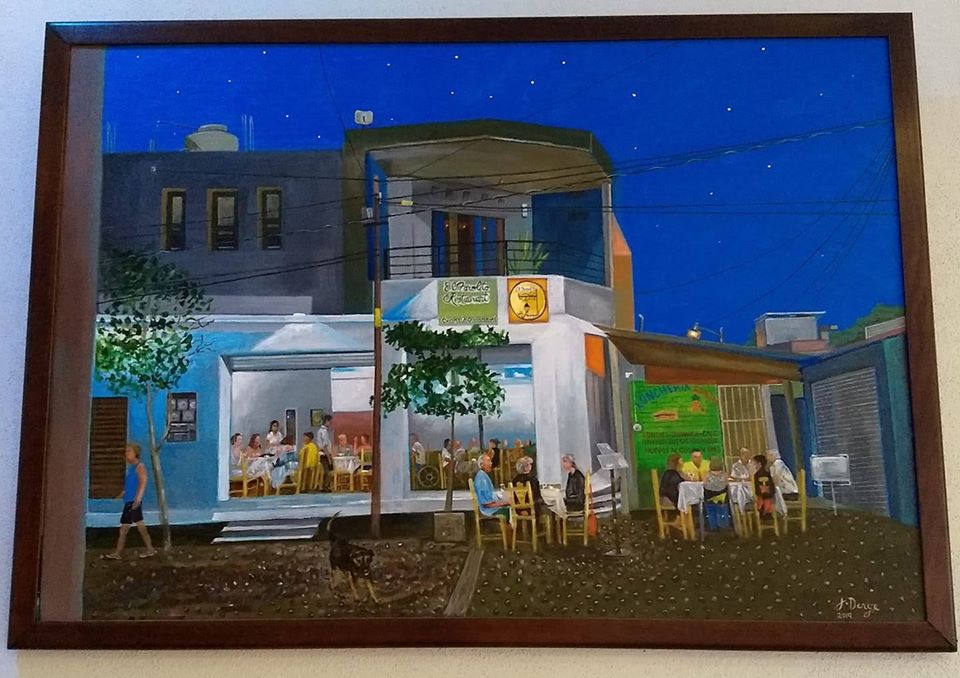 I literally stumbled across this place on one of my morning walks and never noticed that it was a full-service restaurant, serving breakfast, lunch and dinner. El Farolito (The Lantern) is tucked into one corner of the little market stalls in Melaque Centro, one street west and kind of behind Super Hawaii.

It wasn’t until we were sitting in the restaurant having dinner, that we realized that the restaurant used to be in Villa Obregon where Non Solo Pizza is now. The waitress confirmed that they moved two years ago. Friends had recommended El Farolito to us then, but we never got around to visiting.

END_OF_DOCUMENT_TOKEN_TO_BE_REPLACED

I think this is the first time I’ve ever blogged and bragged about one particular restaurant twice. My last post about El Quetzal De Laura in Villa Obregon was for their excellent breakfasts, and now Cathryn and I can rant about their dinners.

Diners have a choice of seating inside and out, the restaurant being shaded by trees, foliage, and an awning out front. Chairs are padded and comfortable, and tables are adorned with real tablecloths.

While waiting on our dinners we heard diners around us raving about their crepes and salad. Cathryn ordered the special-coconut shrimp and I asked for the Popeye crepe that included spinach to make me big and strong. It was also filled with large plump shrimp, onions and cream cheese – a creamy, chewy mixture, wrapped in a light and fluffy piece of heaven. My entree included their house salad, a mixture of greens and shredded carrots and alfalfa sprouts, with a light balsamic dressing. 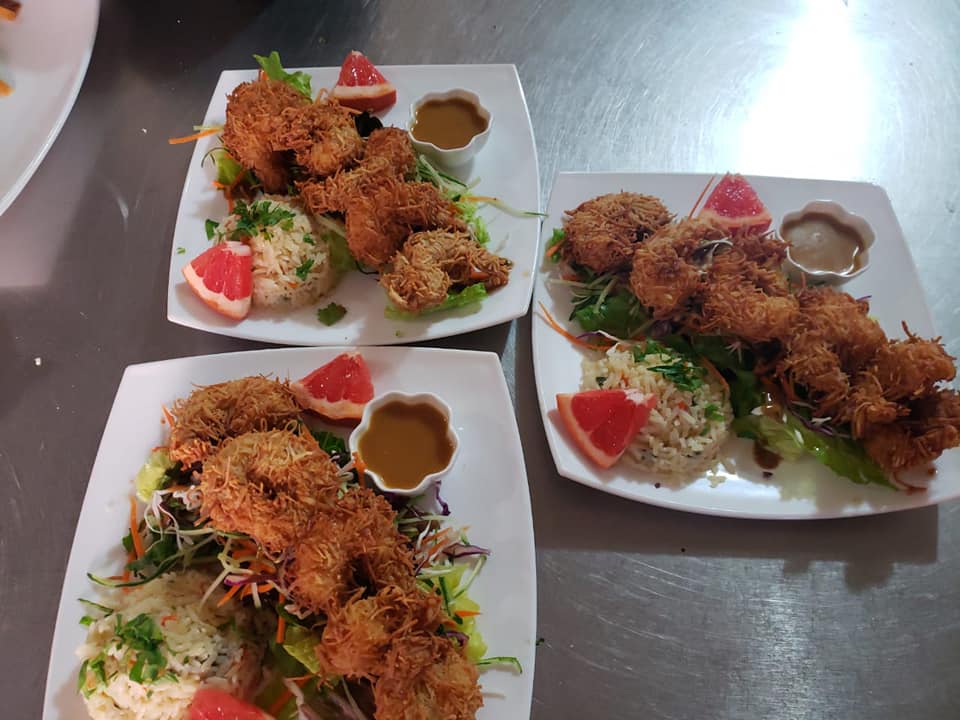 Cathryn’s shrimp were huge but the only gave her six and I was afraid I wouldn’t get a sample. Her plate came with a salad and rice but she opted for veggies, getting a nice assortment and steamed and tender goodies. We both agreed the coconut shrimp was the best we’ve had yet in Barra or Melaque.

I overheard another table raving about the deserts, but I wasn’t fussy about their pie selection. Instead, we indulged in a full-blown banana split, complete with the neapolitan ice cream flavours I remembered from my childhood, and fresh local bananas and strawberries. If I had to complain about anything it would be the lack of hot fudge on the split. 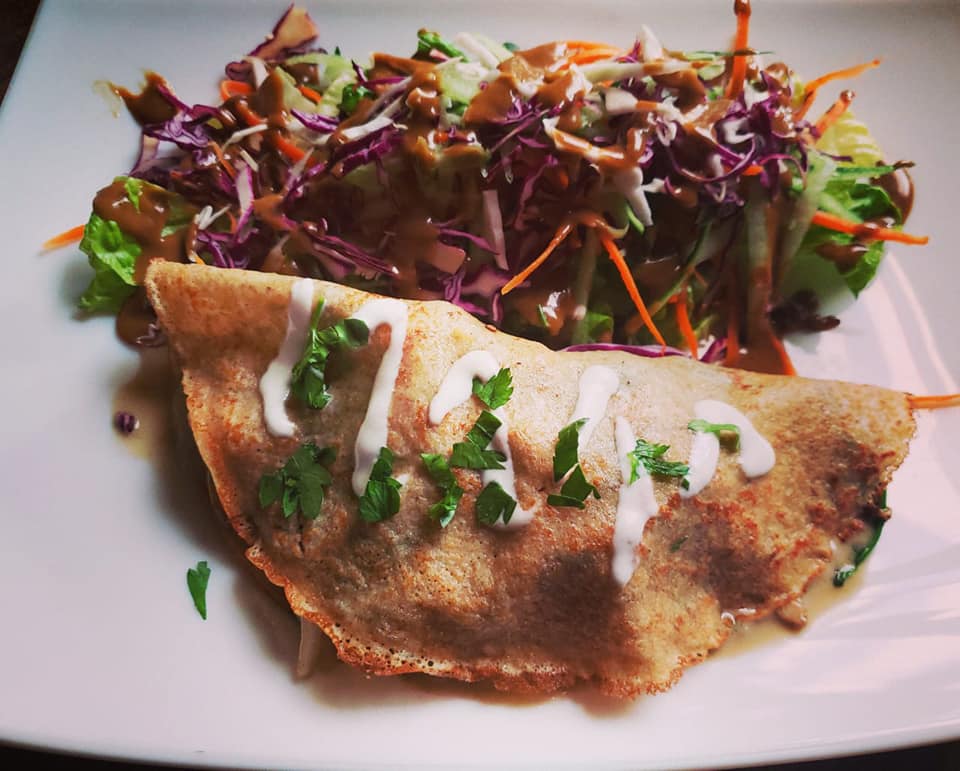 We each had two drinks with our meal and desert. The bill came to $570 Pesos or a hair under 40 Loonies. A steal, considering Cathryn and I think it’s the best restaurant we’ve tried this year in Melaque. We both rated it 10 out of 10.

Cathryn had dropped a few hints that we were over due for a mystery date (an overnight at an undisclosed destination), the comments directed in my direction for her birthday month. It had been a whole two months since our return from Egypt and Africa so I almost felt sorry for her and decided to surf the web for an idea to satisfy her wanderlust itch.

One of my cousins posted on Facebook that she was at the spa in the Elora Mill. The last time Cathryn and I dropped by the village of Elora the Mill was closed, fenced in and under construction. We tried to peek through the fence but couldn’t see what was in the works. I messaged my cousin who said the Mill was newly renovated and open for business.

I browsed the internet and checked the web site, balking at the listed price for spending one night in a hotel room. Reading on I was able to get into the last night of an off-season promotion that made the cost more palatable. Just because I thought my wife deserved a treat I shelled out $350 banana peels for a room in the mill. The clincher for me was a complimentary bottle of premium wine in the room and a hundred bucks off our food and beverage bill in either the lounge or restaurant.

END_OF_DOCUMENT_TOKEN_TO_BE_REPLACED

What ever happened to all the good steak house restaurants? Windsor used to have at least a half dozen top notch places. Did the next generation stop eating steak or do they avoid upscale eateries? Even the Outback Steakhouse couldn’t survive in Windsor.

Not to worry folks. In case you haven’t heard, Nero’s Steak House in Casino Windsor is all things a good beef baron should be, and more. They specialize in prime cuts of meat, but also offer seafood and a full menu.

END_OF_DOCUMENT_TOKEN_TO_BE_REPLACED 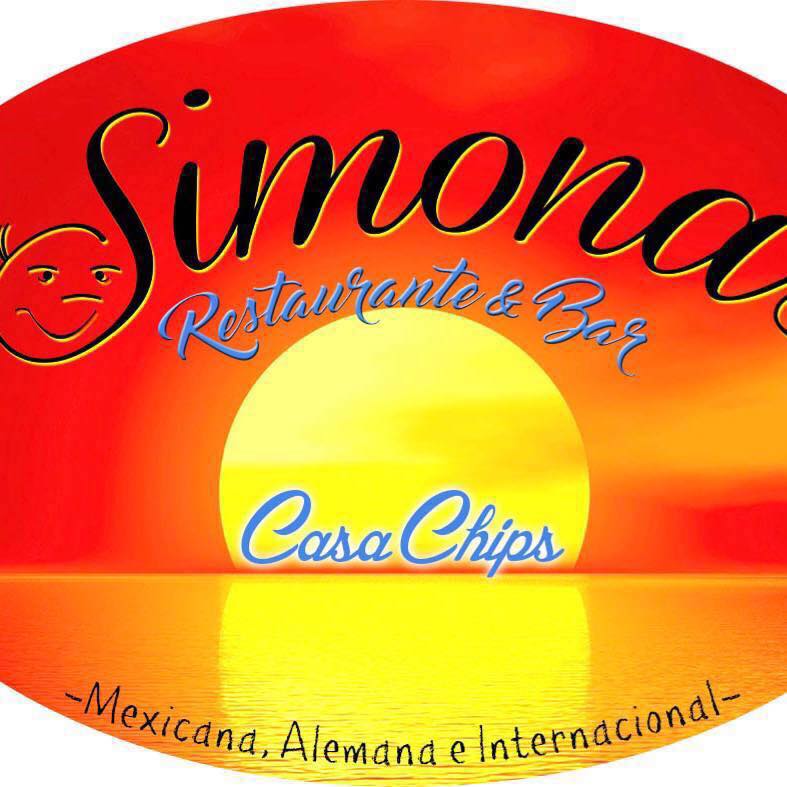 We’ve tried the rest and for us Simona’s in Bara Navidad is the best. There are other very good restaurants in the Melaque/Bara area, but after visiting Simona’s at least a half dozen times it’s still our favorite. 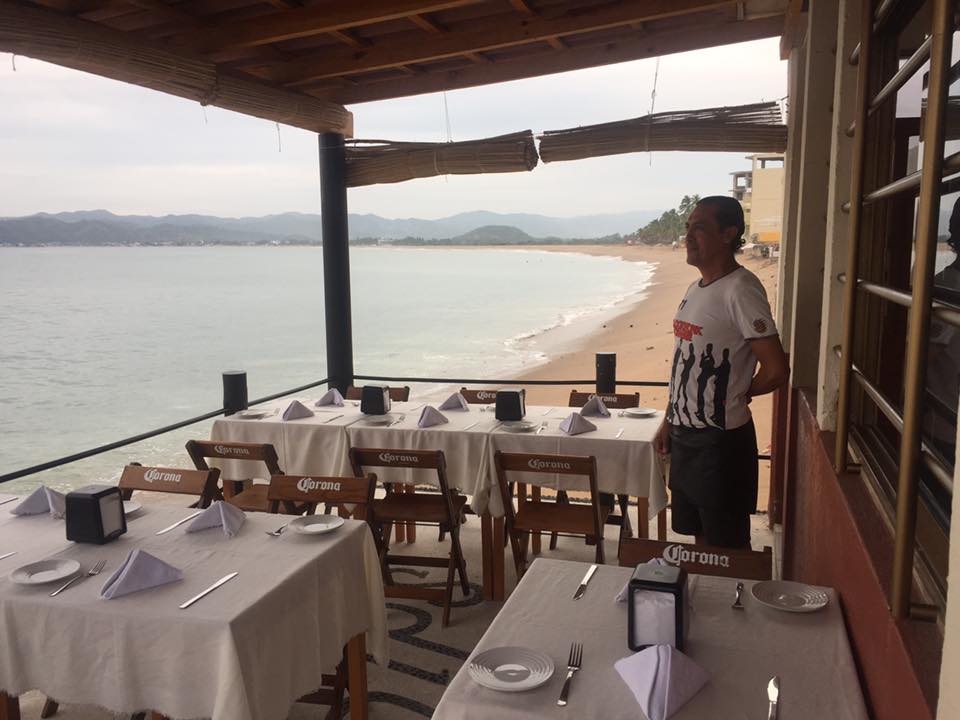 Some new staff that speak gringo are a nice addition this year. Simona and Carlos are welcoming and accommodating as usual. We’ve visited twice in the last two weeks, the first visit was with Cathryn’s mother and her man.

END_OF_DOCUMENT_TOKEN_TO_BE_REPLACED 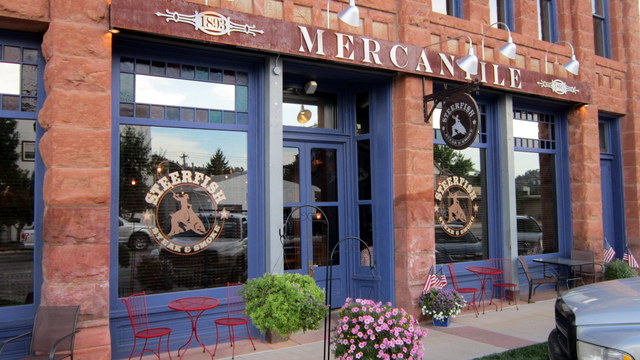 You never know what you’ll end up eating when you’re on the road and looking  a  good meal. Cathryn and I struck it rich in Spearfish, South Dakota when the manager at our motel recommended Steerfish Steak & Smoke.

Spearfish is one of those towns that most folks have never heard of, but this restaurant and the annual motorcycle rally in neighboring Sturgis have put them on the map. If you are ever anywhere in the area, visiting this eatery is a must.

END_OF_DOCUMENT_TOKEN_TO_BE_REPLACED 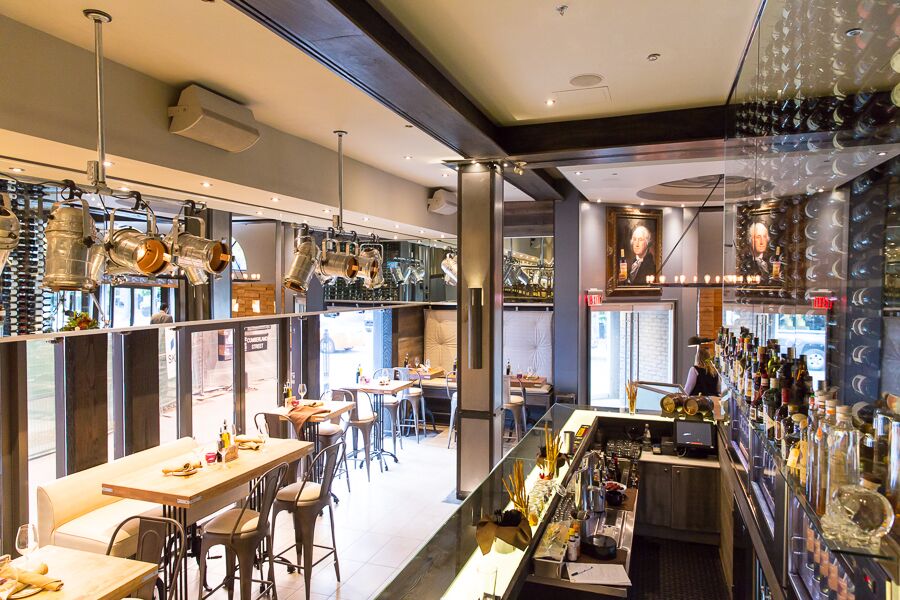 A recent visit to see Cityline in Toronto brought the girls and I to Yorkville.  We discovered that a favorite restaurant named Ciao, at  133 Yorkville Avenue, has been renamed Cibo Wine Bar. It did not disappoint.  I was pleased to hear that there now is a Cibo Wine Bar on King Street as well.The place is huge, among the other posh eating establishments in Yorkville.  Cibo is trendy and loud, but the whole atmosphere is vibrant.

We chose to eat a lighter fare, but every mouthful was amazing.  I highly recommend Cibo Wine Bar, rating it 9 out of 10.

END_OF_DOCUMENT_TOKEN_TO_BE_REPLACED

By Cathryn Gagnon and her Dining Divas

This month the Dining Divas experienced Toscana Restaurant and Wine Bar at 3891 Dougall Avenue, in Windsor.  When making the reservation, the restaurant was completely booked, but they were able to accommodate us in the redesigned bar area.  I actually prefer to sit in the bar area at restaurants; the energetic atmosphere is abuzz, making it a fun setting.

Although it’s a fair size, Toscana is always full. The new bar area now seats about 20, and puts diners face to face with the sushi chef. Stylish round booths surround the comfy bar stools. Our favorite way, for my husband Ed and I to enjoy Toscana, is to reserve a bar stool and share a few of our favorite starters, paired with a bottle of wine.

END_OF_DOCUMENT_TOKEN_TO_BE_REPLACED

Two of the main buildings at the Ben Miller Inn & Spa are over one hundred and thirty years old, but it’s the simplicity and charm of the old grist mill, that keeps visitors coming back for some good old fashioned country R & R. It’s nestled in the rolling hills near Lake Huron, about ten minutes from downtown Goderich.

Rooms are available in different buildings or cottages, depending on the experience you are looking for. We stayed in one of the Mill rooms that overlooked a gushing stream and the Maitland River. The sound of the water and the view were amazing.

The room was clean will all the amenities, including a mini hideaway kitchenette. I was a bit disappointed with the overall condition of the old Inn. There is being old and there is looking old; the Inn looks like it could use some TLC. It was more evident on the property away from the main building.