A fellow local author recently told me her books were listed on Walmart.com and she had no idea how they got there. So, I checked the site myself and Presto! My books are listed there too, some at better prices than Amazon. I thought I’d pass on this news for anyone who buys books online and is thinking about purchasing one of my titles. Happy shopping!

All Books by Edmond Gagnon are now Available through Google Play

They say having faith keeps you positively motivated, with a great outlook on life. For me, ‘Having Faith’, means my next book, the sequel to ‘Finding Hope.’ Norm Strom fans and readers have pondered the open ending of Hope and asked what happens next, and if there would ever be a sequel.

Finding Hope has been my best-selling novel so far, with Border City Chronicles closing in fast for second place, catching quickly up to Rat. So, for all you murder, mystery, and serial killer fans out there, this next one’s for you. I’m happy to announce I’ve just cracked the 10,000 word mark and am on a roll.

In this story Norm will be joined by the hot black homicide detective from Detroit, Abigail Brown, who was the main character in ‘Knock-Out’, the last story in Border City Chronicles. She will take the reigns again, on her home turf, in the gritty bowels of downtown Detroit, hunting a serial killer. Who will it be this time?

It’s coming. Christmas will be here before you know it. If you’re wondering what to get that person who’s hard to buy for, and they like to read, then consider getting them an autographed copy of one of my books, or a complete gift set of my Norm Strom Crime Fiction Series.

Any of my books are online through sellers like Amazon, or available at PB Books or Juniper Books, in Windsor. I will be selling and signing books at several functions and craft shows from now until Christmas. Click HERE for a complete list of the events.

If you want to see my individual books and read their intros please click HERE.

This movie is tough to review. To say that Cathryn and I enjoyed it, would be using the word to describe that fact that it was well received. The plot is deep and dark, but like my novel, Finding Hope, the Highway of Tears, it’s another sad and true story about the lack of caring and respect for aboriginal women across our continent.

This story is about two women who die on the Wind River Reserve in Northern Wyoming. A fish and wildlife tracker, reserve cop, and a lone FBI agent team up to investigate the latest rape/homicide. The remote location of the crime challenges the team.

Jeremy Renner, Elizabeth Olsen, and Graham Green play the dream team. Stellar performances were delivered by all. I’m personally tired of seeing the plight of first nations people on reserves –  all other previously oppressed races have learned to move on. Having said that this movie will drag you into their misery and make you wonder why this type of crap still goes on in this day and age.

4 & 5 Star Reviews from Goodreads and Kobo:

My favorite book thus far by Ed. I intended on reading just a few chapters today but his writing kept me so captivated and wanting more, I finished the book in hours. Looking forward to the next novel by this wonderful story-teller.    Dawn S.

Captivating story based on the circumstances which unfortunately continue to occur on the infamous Highway of Tears in Northern British Columbia. While reading this book, I found myself re-processing the events well after I had put the book down, and then I couldn’t wait to get back into it! Compassion for the victims, as well as trying to analyze the thoughts of an isolated bushman, topped off with a touch of romance, Finding Hope will not disappoint.  Brenda B

This novel is based on the abused and murdered women in British Columbia. Precisely route #16. It held my interest, trying to figure out one of the killers—which I was able to do early on. It’s a Norm Strom book by Edmond Gagnon. Norm is a retired police officer who gets caught up in the search for one young woman who disappears. He helps the RCMP to find her and to solve some of the murders. It’s a hard book in some parts as the language is crude and some violence graphic. If you’re into crime and resolve you will enjoy this book of fiction based on fact.  Jackie R

The book was a good read, fast, and kept my interest going. The characters were just enough to identify with each one. A human story of all the girls that were lost and never found. The main characters were serious and funny. The writer wrote about highlights along the highways that made you feel like you were right there. The ending was suspenseful and kept me wondering. Edward G 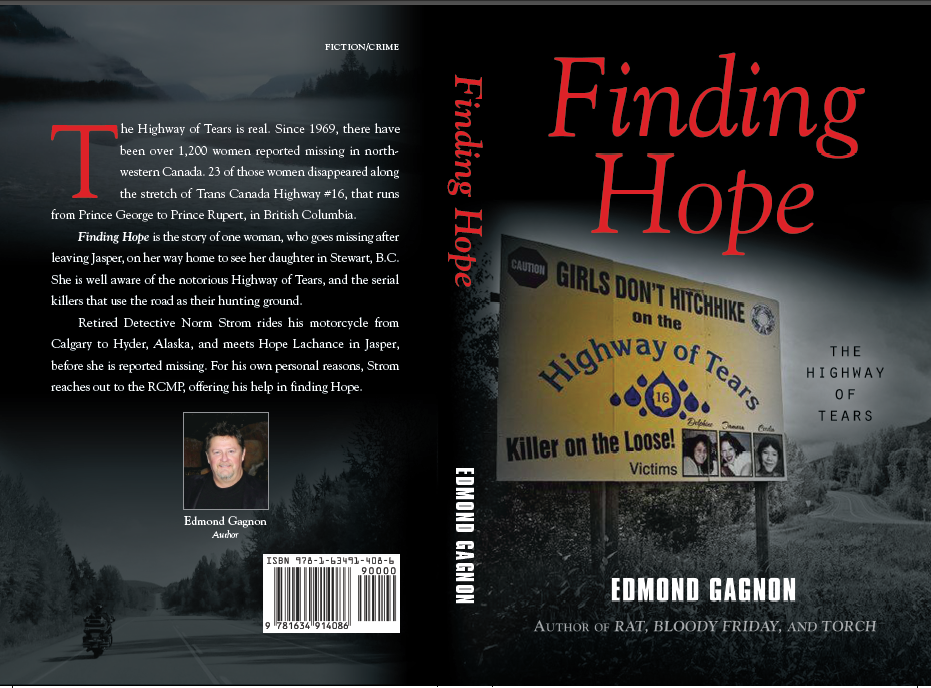 “Finding Hope, The Highway of Tears, is a fictional depiction of a true real-life horror story. Gagnon tells us the story of Hope, who goes missing along the notorious Highway #16, in northern B.C. and is sought by retired Detective Norm Strom. Engrossing plot, engaging characters, and superb imagery make this a hard story to put down. This well-written and timely account of a truly heart-wrenching problem, is well worth the read.”—Christine Hayton – Author, Samhain Publishing Ltd.

“Fix yourself a cup of tea and settle in for a great rainy-day read. You’re not going to want to put down “Finding Hope.”  The author takes you on a haunting ride up western Canada’s Highway #16, from Calgary to Hyder, Alaska. Along the way, retired Detective Norm Strom meets Hope Lachance, and then helps the RCMP try to find her after she’s gone missing. Strom learns the real reason why the aboriginal people call the route, The Highway of Tears.” —Caroline Hartman – Author of Summer Rose

“Ed Gagnon weaves fiction and reality into an exciting story about the Canadian women who have gone missing along The Highway of Tears, in northern British Columbia. More than a book about crimes against women and the lack of attention from law enforcement, Finding Hope is about prejudice, despair, and the courage of one woman named Hope.”   – Ben Van Dongen – Co-Author of No Light Tomorrow