We started the second half of our westward journey on Route 66 on Sunday, June 16th, in Amarillo, Texas. Not too far out of town I had to throw out the anchor and do a u-turn to stop at the infamous Cadillac Ranch. For those unaware of the legend and song that refer to the unusual site, this one boasts ten old Cadillac’s that are standing on end, partially buried, looking like the American version of Stonehenge.

For years, tourists have been stopping at the eyesore or work of art, depending how you look at it, to spray-paint or write their names or whatever on the empty shells of the once-classic cars. We entered the field through a gate in the fence, careful not to touch it, since eager tourists start tagging right there. Every color of paint you can imagine decorated the gate, fence, and packed dirt path leading to the monument. 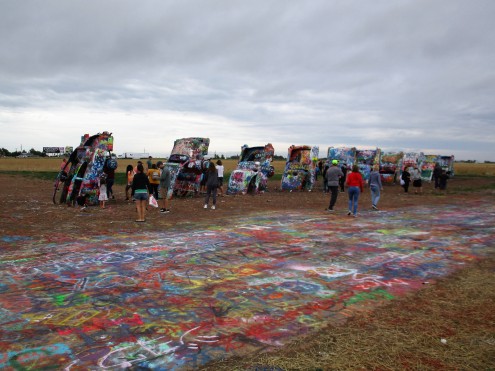 We made it all the way to the site and realized we’d forgotten the spray paint that I’d packed and Cathryn had to make the trek back to our car. Upon her return she said she had misplaced the paint but borrowed some on the way back to put our initials along the path. I was sad we couldn’t paint the cars so she picked up a used can laying on the ground.

It didn’t take long to understand why it had been discarded – when I looked at Cathryn she had dots of blue paint all over her face, in her hair, and on her clothes. She was not happy, it didn’t match her outfit at all.

There were more abandoned gas stations and motels along the old road. We stopped for the night in Albuquerque New Mexico and stayed in an old motel that’s been refurbished, Then we walked around Old Town, stopping for beers and grub. We decided to go authentic Mexican that night. Late Monday morning we were into Arizona and heading for Flagstaff. It wasn’t long before we took in the majestic snow-capped mountains and felt the change in elevation in our ears. 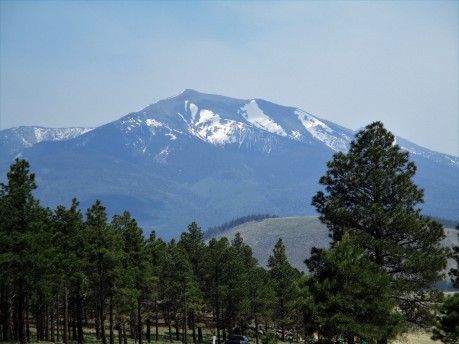 We’d passed through lots of cool old towns and ghost-towns in both New Mexico and Arizona. In many places the old road parallels the railway tracks that stretched across the country before the automobile was invented. Now, mile-long trains haul containers or truck trailers though the southwest. The Interstate system carries freight and passenger vehicles that bypass little towns that have either dried up or are struggling to take advantage of the allure of Route 66.

After crossing the Continental Divide and forging into Arizona we picked Flagstaff as a jump-off point to visit the Grand Canyon, only two hours off the Mother Road. On the way there we did a loop through the Painted Desert and a bit of the Petrified Forrest. I’d be remiss if I didn’t mention stopping and standing on a corner in Winslow Arizona, it was such a fine sight to see.

Staying a second night in Flagstaff allowed us to spend more time at the Grand Canyon, a truly amazing place that must be seen to be truly appreciated. Staying put for an extra night also gave us time to detour through Sedona and a great little old mining town called Jerome. Both areas challenged my driving skills with mountain switchbacks and roads you could never attempt when ice-covered.

The red rocks of Sedona are eye-popping. Stumbling into Jerome was a pleasant surprise, and one that had us park the car to explore it on foot. By Wednesday the 19th, we were bedding down in Kingman Arizona, a self-proclaimed Route 66 destination. The small city has revitalized its downtown with cafes, museums, murals and souvenir shops.

Kingman is only two hours from Las Vegas so Cathryn and I decided to relive our wedding stay there for two nights. We took in the Beatles Love Cirque show and had two great dinners at Lawry’s and Batista’s, the same places we dined six years ago. The Stage Door bar we hung out at has gotten a bit rougher, there were three fights while we were there. We almost got kicked out because we had no ID with us and according to the manager it didn’t matter how old we were. Drunks, crackheads and prostitutes were okay as long as they had someone’s ID. 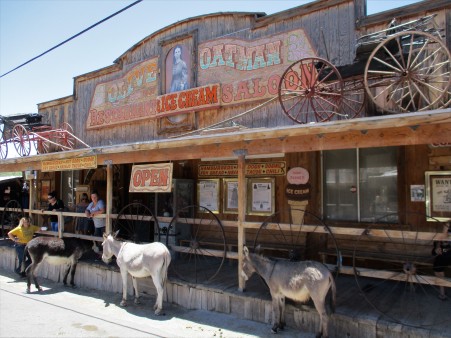 After Vegas we backtracked to 66 so not to miss Oatman, where wild donkeys roam the streets with the tourists, slowing traffic to a crawl. It became a ghost town when the miners left the animals behind to fend for themselves. The drive in and out of Oatman was pretty crazy – mountain roads with no guardrails and at least one wrecked and rusting car left to rot in the rocky terrain.

It wasn’t long before we got into California, our last state. Saturday night, the 22nd, we plugged in at Barstow. After that there wasn’t much left of the old 66. The closer we got to L.A. and the Pacific coast, the bigger the roads got and the heavier the traffic. Of special note were the motorcyclists who split lands whether in bumper to bumper traffic or at 75mph. Keep your arms in your vehicle at all times or lose them, I swear one idiot brushed my mirror with his jacket.

Old 66 may be virtually gone in coastal California, but the official end of the road is on the Santa Monica Pier. It was blocked to vehicular traffic while we were there, a necessary measure for the thousands of pedestrians who strolled, dined, and played there. We nearly had to fight dozens of other tourists for a photo op in front of the Route 66 sign. I’m sure 99% of them didn’t know what it was and definitely didn’t travel it’s 2,500 miles like we did.

All in all it was a fun ride. An adventure that took us back to a simpler time when the world moved slower and was a bigger place. It’s hard to imagine how folks did it back then with no air conditioning and sections of road that were dirt or unpaved. Things like fast-food and bottled water and GPS had not been invented yet. You had to read a map or count on road signs to navigate your way across America. Long live the Mother Road.