This story was taken from Ed’s book, “A Casual Traveler“

Hanoi, Viet Nam was not kind to me during my stay, but it served me well as a base while I visited other places in the area that I wanted to see. I was told there are 50 million scooters in the country of Viet Nam and 6 million people in Hanoi. I believe the majority of the scooters were in Hanoi.

Considering the crowds and vehicular noise, I decided to get out of town. There are always plenty of options when you travel on your own with no set agenda. I decided on a no brainer mini-trip, where I set my own itinerary. I booked a four day tour that combined two days on a boat in Ha Long Bay with two days of trekking in the mountains near Sa Pa, near the Chinese border.

After booking the trip and wasting the day wandering around Hanoi, I chose to have dinner at a restaurant right across the street from my hotel. Nothing else had caught my eye. A place full of locals is usually the sign of a good restaurant.

I was on my first beer when a black man came in; I recognized him from my hotel. I offered him a seat at my table and he introduced himself as Finnegan, from the United Kingdom. He said he was originally from St. Lucia, in the Caribbean then he relocated to London, England. He ran a greasy spoon type of restaurant there. 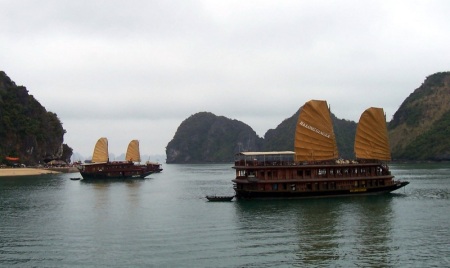 He talked about how he just sold the restaurant and about a few different women in his life. I wasn’t sure if he was celebrating retirement or running from the women. Either way, he was cool. We chuckled at how the restaurant staff kept staring at him.

Apparently, black men with fuzzy hair are rare in Viet Nam. They called him chocolate man and the young girls asked to feel his hair. Finnegan rolled with it. I asked him what the hell kind of name Finnegan was, for a black man from St. Lucia.

We bumped into each other again the next morning, while we waited in the hotel lobby for our shuttle bus; ironically, we had booked the same tour. We spent some time on a bus that took us to the Gulf of Tonkin and Ha Long bay.

When I stepped off the bus and looked into the sea it was like looking back into history a hundred years. The bay was littered with anchored Chinese Junks and the wharf was crammed with more of the same. There were hundreds of the turn-of-the-century looking ships, some with their massive sails up and on display.

For those who haven’t seen one of these ships before, they are built from stem to stern of wood, finished with a shiny marine varnish. Most were two or three decks high, some with giant pleated sails that looked like seashells. Quite a contrast from busy and gritty Hanoi.

Our tour guide waved us on to the pier, where a dilapidated wooden motor boat jockeyed for position with about twenty other similar boats. There was no method to the madness—all the different tour companies tried to get their busloads of tourists on to the boats at the same time.

The problem was there was only room for two or three skiffs to dock and pick up passengers, but the little people are impatient. Huge swells slammed our boat against the cement dock several times, while the guides had us hop aboard in rhythm with the moving boat. I was amazed that no one fell into the water.

Everyone got onto the boat in one piece and we headed out into the bay where dozens of Junks were anchored nearby. We headed toward one of the larger, prettier vessels and everyone got excited. We motored past the beautiful ship and pulled up along side one a lot less dramatic.

Our boat wasn’t as fancy as the other one—like promised in the brochure, but it was still very nice. The glossy wood and polished brass was immaculate. We were seated in the dining room for orientation; it had beautiful wooden tables and chairs.

The guide handed out room keys to everyone except Finnegan and me. He had one key left in his hand and he asked us to follow him to our room. It was a beautiful room with two single beds. We looked at each other and laughed uncomfortably. I told the guide that I liked Finnegan, but we each paid for our own rooms and we’d rather keep it that way.

The guide grumbled and groaned then left us standing there; he disappeared with his cell phone to call someone in charge. He eventually returned and gave us each our own room. They had left one room for the staff, but it wasn’t to be. They had to sleep on benches and chairs in the dining room or wherever else they could find a spot.

We cruised out into the bay; the weather was overcast, with a light drizzling rain, on and off. It was unfortunate—the scenic bay looked awesome in the pictures I had seen in brochures and on the internet. Still, it was a different world—towering green stumps that were once mountains, were scattered throughout the bay. There are sixteen hundred of the old megaliths, most of them uninhabited islands, because of the rocky and steep terrain.

We motored on, passing the odd fishing boat—little rickety wooden craft, with tin roofs for shade and nets they tossed by hand. The Vietnamese fisherman looked typical to us westerners; they wore black pajamas and straw lampshade hats.

We dropped anchor somewhere in the middle of the bay for the first night. A delicious meal were included and served in the dining room; fish with rice and plenty to eat. None of the booze was included, but it was for sale. Finnegan and I each took a bottle of wine up onto the roof top deck after dinner to socialize and star gazing.

We met a group from Quebec and a couple from Ireland. When we weren’t chatting we stared into the sky and tried to distinguish satellites from shooting stars. Two brothers from Quebec saw their own strange things in the sky—probably from the shit they were smoking. It wasn’t marijuana and they swore it was getting them high.

I was one of the last ones to remain on the roof. I remember being overwhelmed by the huge sky above me and its deafening sound of silence. The only sound was the water, gently lapping the side of our boat. I had a great night’s sleep.

The next morning, before we pulled up our anchor, a woman rowed up alongside of us in her floating 7-11 store. There are no stores or supplies within miles so this entrepreneurial gal rowed around the bay from boat to boat, selling everything from bottled water to batteries.

The tour took us to a large island where we did some spelunking. There were more floating mini-markets there, selling fresh mussels and oysters.

Once again our skiff had to jockey for position with all the other boats, trying to get us onto dry ground. A cave is a cave, as far as I’m concerned, but this one was huge and offered some great views of the bay and the hoards of anchored Junks. Many of the beautiful pictures you see in brochures are taken from the vantage point.

The afternoon was ours to waste away; kayaks were available or you could snorkel too. I caught up on my travel notes and chatted with the pregnant woman from Ireland, up on the top deck. The sun made an appearance and lit up the bay, showing off its natural beauty.

The cruise back was uneventful, except for me watching in amazement, how our captain steered the boat from his bunk, with his feet, while he lay back sucking on a cigarette.

Back on land our group was split up and sent to different buses, depending on the next destination. The Irish couple was going to Sa Pa, which was also my next destination. We said good bye to the rest of the gang and headed for the mountains.