Halloween is coming but the Millionaire Murders will be here first. The official release for my latest novel in the Abigail Brown Crime Series is October 1st – you can pre-order online, as a few of my devout fans already have (Thank you!).

This story is set in Detroit, where a new and unusual serial killer preys on Detroit’s elite, challenging Major Crimes Detective Abigail Brown as she never has before.

My first bulk order is being printed as I write this post. I hope to have paperback copies available in Story Tellers in Windsor and River Books in Amherstburg by October 1st.

I’m also working on putting together a local authors Christmas show, showcasing literary talent from across Essex County, giving readers a chance to meet the authors and purchase personally autographed copies of their work. Watch my social media sites for further information. I can tell you now it will be on Sunday, December 11th, so keep the date open.

I’ve read Baldacci before but not with the protagonist Travis Devine. I liked the character, he was real and easy to relate to, not a super hero by any means, just a good guy trying to do the right thing.
The story was different; a murder in the financial district, obviously committed to cover up something illegal. But the plot is not that simple.
Baldacci keeps us guessing as to who done it, then adds in a few more murders to confuse us even more. A few twists and turns of events and late surprises keep you flipping pages right until the end.
The pace was quick and the story was interesting. A good read.

First off, after reading this book, I have no idea where the title comes from. There’s also a book of the same title by James Patterson.
One of the reviews says that M.J. Arlidge is the the next Jo Nesbo. I disagree.
I found the book a choppy read with a bit too much touchy-feely stuff for my liking, where we were told how the characters ‘felt’ at each and every turn. Perhaps that comes from the voice of female authors, since I find it more often than not.
I also think the author went overboard on female characters…the protagonist, antagonist, and most other characters, with the exception of two males. In any policing organization that I am aware of, that is just not the norm.
Other than those quirks, the story is a good read.

This was one of three Bosch novels I traded for while in Sayulita, Mexico. All are out of order, something that happens when you pick up cheap second-hand books to read while you’re away. If that’s not confusing enough, I’ve made it worse by watching all seasons and episodes of the Bosch TV series.
So, where it was nice to read the more in-depth literary versions of certain stories, it also had me confused at times where certain characters, partners and cases have been changed or condensed for the theatrical version. Either way, it’s all Bosch and it’s all good.
This story is typical Harry, where he won’t rest until he brings a killer to justice. Throw in an old case that comes back to haunt him, worry about his daughter, the usual politics that comes with police work, and you have another good Bosch novel.

When will Harry Bosch be old enough to fully retire? It mentions in this book that he’s almost 70! That means he’s been chasing killers for over 40 years. That would be way more than enough for me to want something more out of life. But then who could we count on to fight for all those lost souls…the one’s that matter because they all matter.
Even though Harry is retired from policing it doesn’t stop him from teaming up with one of his old partners (Renee Ballard) to hunt down killers. And Bosch’s brother from a different mother (Mickey Haller) gets a bit of ink in this book, now that the two of them have found some common ground to get along.
I enjoyed The Night Fire but the Ballard character just doesn’t do it for me. As usual, Bosch is the anchor that holds Connelly’s ship fast.
Hopefully the author can get a few more stories out of our favorite cop character before he gets stuck in the mud at the bottom of the ocean.

For me, reading a Harry Bosch novel is like inviting an old friend to dinner and catching up over beers. The Black Ice is the 2nd installment in Michael Connelly’s Bosch series, published back in 1993, but recently re-released as a paperback.

Whether it’s an old book or a new one, I can’t get enough of Harry Bosch. There’s still a few stories I haven’t read yet, but the television series has filled in a lot of the blanks. I think I’ve seen each episode at least five times now.

The Black Ice is a good story, about a Robbery/Homicide case that should have been assigned to Bosch, but he inserts himself into it anyway. The plot moves well and kept me interested throughout. And, if you’re a really sharp detective, you might pick up on a couple clues as to the major twist at the end.

I’ve rated this book five stars because it lacks nothing and is a great read.

I find it strange how Jack Higgins took a perfectly good thriller and turned it into a lack-luster story that was barely worth the three stars I gave it.
I struggled through the first half of the book, trying to figure out what was bothering me so much, and I came up with a few things.
The characters all seem to be rich, drink only champagne no matter the occasion, and lack any type of empathy or emotion throughout the story.
Those same characters lack description, thus giving the impression they all look the same and are cut from the same cloth.
Even the action scenes were dull.
I’ve read two other Higgins novels and have now been disappointed twice. 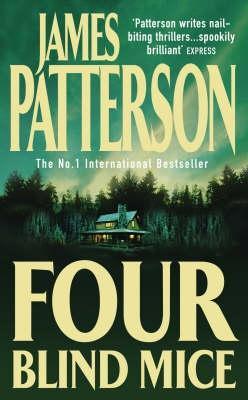 Edmond Gagnon‘s review
May 31, 2020
I usually like to rag about Patterson because of all the other writers who gain attention from using his name, but this story is his, and a good one.
What made the book more enjoyable for me is his protagonist, Dr. Alex Cross. I liked the character in other books he’s in, as well as a few movies based on his exploits.
The story moves well, and is a fast read with hardly any fluff. There’s just enough backstory to keep you in the loop, and the other characters added depth to the story.
The plot seemed predictable, but a couple twists kept me curious right until the end.
A truly enjoyable book.

Edmond Gagnon‘s review
Jan 03, 2020
I love Harry Bosch. I’ve watched the five seasons of the TV show twice now and have read many of Michael Connelly’s books with Bosch as his main protagonist. I’ve also come to like the Lincoln Lawyer character, Michael (Mickey) Haller. The Brass Verdict finally made it clear to me how the two characters are related. The two men are actually step-brothers who never associated before the case involved in this book.
The Brass Verdict is a lot more than courtroom drama, with insights into the characters, murders, and bits of the police investigation from Bosch’s end. It’s great cross-over story. Connelly nails the action from all sides of the law, probably why he’s become one of my favorite authors.

They say having faith keeps you positively motivated, with a great outlook on life. For me, ‘Having Faith’, means my next book, the sequel to ‘Finding Hope.’ Norm Strom fans and readers have pondered the open ending of Hope and asked what happens next, and if there would ever be a sequel.

Finding Hope has been my best-selling novel so far, with Border City Chronicles closing in fast for second place, catching quickly up to Rat. So, for all you murder, mystery, and serial killer fans out there, this next one’s for you. I’m happy to announce I’ve just cracked the 10,000 word mark and am on a roll.

In this story Norm will be joined by the hot black homicide detective from Detroit, Abigail Brown, who was the main character in ‘Knock-Out’, the last story in Border City Chronicles. She will take the reigns again, on her home turf, in the gritty bowels of downtown Detroit, hunting a serial killer. Who will it be this time?