It’s not often that I rave about a great breakfast restaurant, you’d probably find only two or three if you searched my archived blogs. And if my memory serves me correctly, I’ve only wrote about one in Melaque, Mexico.

Today, during my morning walk through Melaque, San Patricio and Villa Obregon, I came across the Restaurant “El Quetzal” de Laura, in Villa Obregon. Cathryn and I had walked by this place before and I think it was recommended to us for dinner a couple or three years ago. Obviously, it was our mistake in not taking the advice.

END_OF_DOCUMENT_TOKEN_TO_BE_REPLACED

This post is for all Canadians and pizza lovers staying in Villa Obregon, Melaque or San Patricio. The pizza restaurant formerly known as Nonsolopizza, on the corner across from the bus station and beside the taxi stand, is now called “Soprano’s Pizzeria.” The owner said he had to change the name for technical reasons.

END_OF_DOCUMENT_TOKEN_TO_BE_REPLACED

It will be no surprise to some of our friends who already dine at Etta’s Greekish Eatery, that it’s become our favorite breakfast place. We’d heard it was going to change hands, with a new non-Greek owner taking over, and we were a bit concerned they’d change things and ruin a great restaurant. Don’t worry, that’s not the case.

I’d just been talking Windsor Pizza with some buddies, who’ve all noticed how great Italian Pizza places have all but vanished – with other ethnicities taking them over and ruining a good thing. Etta’s seems to be an exception so far, they’re still serving the same great food and they’ve kept the same staff. They can make all the difference, as we learned from the Country Diner on Manning after the old cook retired.

END_OF_DOCUMENT_TOKEN_TO_BE_REPLACED 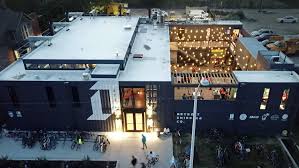 It seems Cathryn and I don’t get out for dinner as much these days, mostly because we like to cook, and that we expect good food and service for the price we pay. We’ve also been slacking in visits across the border to Detroit, where exciting things have been happening in the restaurant and entertainment scene.

Take the Detroit Shipping Company for example. Some enterprising entrepreneurs took a vacant lot near the Cass Corridor, stacked metal shipping containers in the shape of a square, and added a handful of specialty restaurants to a revitalized neighborhood. The is plenty of room for inside and outside drinking and dining and hanging out.

END_OF_DOCUMENT_TOKEN_TO_BE_REPLACED

Cathryn and I don’t get out for dinner much these days, mostly because many restaurants aren’t all they’re cracked up to be. Who wants to pay forty bucks for a steak that’s not cooked to your liking or eat frozen veggies. Maybe it helps in our case that we both like to cook, and cook the way we like.

Not to say there aren’t any great restaurants in Windsor. Take the little Italian grill and pasta shop called, Capone’s on Wyandotte Street, in old Riverside. Owner John Fuerth is the restaurant’s first reason for success. He openly admits that he mimicked his favorite Italian restaurant, the Cook Shop, when he created Capone’s. 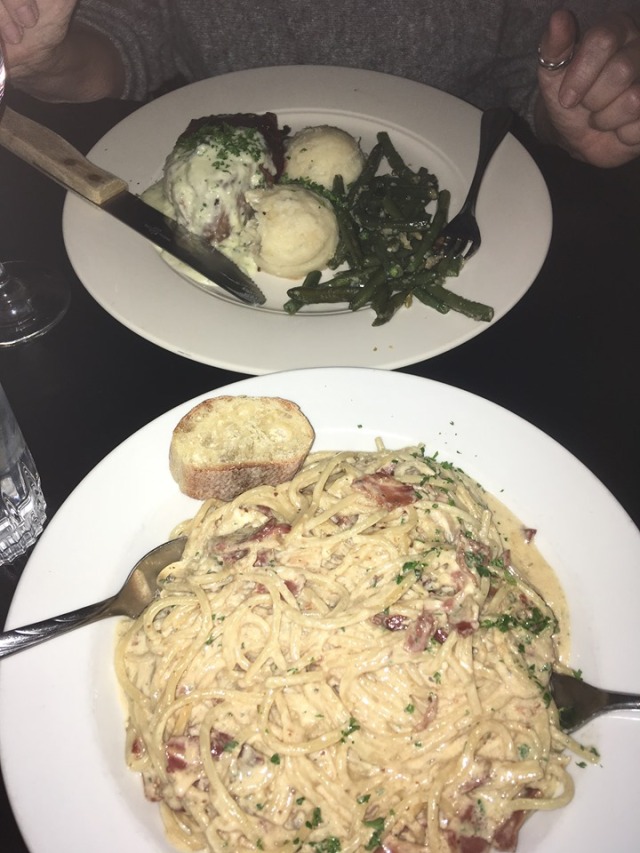 Cathryn and I have eaten in both places and John hasn’t missed a beat. We were able to get a table on Friday night without reservations and were welcomed as if we were extended family. We started with the scallop appetizer special. They were plump, seared to perfection and served with a tasty reduction and veggie slivers.

Cathryn had the Chateau Briand and I ordered the carbonara with pancetta, asking for it to be on the creamy side. The wait wasn’t long and our meals were served piping hot from the kitchen that was only a few feet away (a very cozy place for the cooking staff). C’s filet was cooked exactly how she asked. I received a damn good sized bowl of pasta – easily the best carbonara I’ve had in many years.

For dessert we had cheesecake that was made inhouse. It was not your normal triangle slab cut from a pie tin. It resembled a large scoop of ice cream, light and creamy, with no gram crust, and topped with blueberry sauce. OMG good.

Even with a decent bottle of  wine, our bill barely broke a hundred dollars. The same meal would have cost us almost double at the Cook Shop. John told us Lino recently retired and sold the downtown landmark. Not a problem for us since we’ve found our new favorite Italian eatery. Both C and I give Capone’s a 10 out of 10, and I think that’s the first time ever.

After retiring I worked for Niagara Wine Tours, a company who was trying to expand into the Lake Erie North Shore region. They were already tapped into the Toronto market and thought the wine industry in Essex County was ripe for the picking. Unfortunately the company couldn’t garner enough interest to keep them afloat. The main complaint from out-of-town tourists was our lack of places to stay.

Fast-forward about ten years and we have fifteen wineries and almost as many breweries or brew-pubs. Existing estates expanded to accommodate tour buses and gatherings such as wedding receptions. Bars and restaurants got in on the action by offering local vintages and brews.

END_OF_DOCUMENT_TOKEN_TO_BE_REPLACED

Let me get to the meat and potatoes about this travelling thing – what the hell do you eat when you’re in countries like Egypt, South Africa, and Tanzania? Well, let me tell you that Cathryn and I have probably walked a hundred miles in the last two weeks and we’ve still managed to put on a few pounds.

END_OF_DOCUMENT_TOKEN_TO_BE_REPLACED 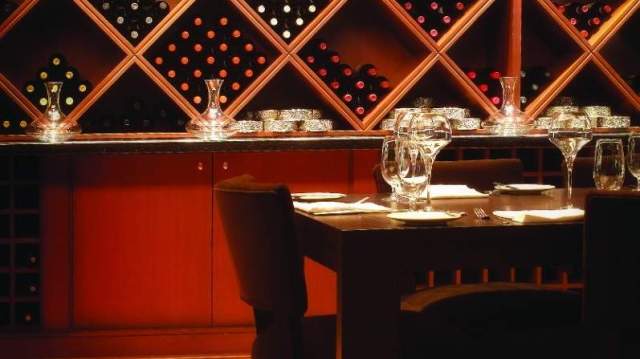 What ever happened to all the good steak house restaurants? Windsor used to have at least a half dozen top notch places. Did the next generation stop eating steak or do they avoid upscale eateries? Even the Outback Steakhouse couldn’t survive in Windsor.

Not to worry folks. In case you haven’t heard, Nero’s Steak House in Casino Windsor is all things a good beef baron should be, and more. They specialize in prime cuts of meat, but also offer seafood and a full menu.

END_OF_DOCUMENT_TOKEN_TO_BE_REPLACED

When Cathryn and I travel it’s not all about the journey or the destination, or even the food and drink. Granted, those are all good reasons as to why we travel, but we also love to meet new people and share in their culture. People are one of the reasons you’ll see us perched on stools at the bar instead of sitting at a table by ourselves.

It’s not that we don’t enjoy each other’s company, we do, and we travel well together. Spending days or weeks together 24/7 can be trying for any couple or even close friends. Consider yourself lucky if you can get along with your travel partner.

END_OF_DOCUMENT_TOKEN_TO_BE_REPLACED

One of our favorite breakfast spots in Melaque is El Patio, on the same side of the street and just west of the Bus Depot and Roosters. You can actually walk right by the place if you’re not looking for the restaurant, there are three tables out front on the sidewalk that give it away. Our first time there we didn’t even know there was a beautiful courtyard patio inside, past the kitchen.